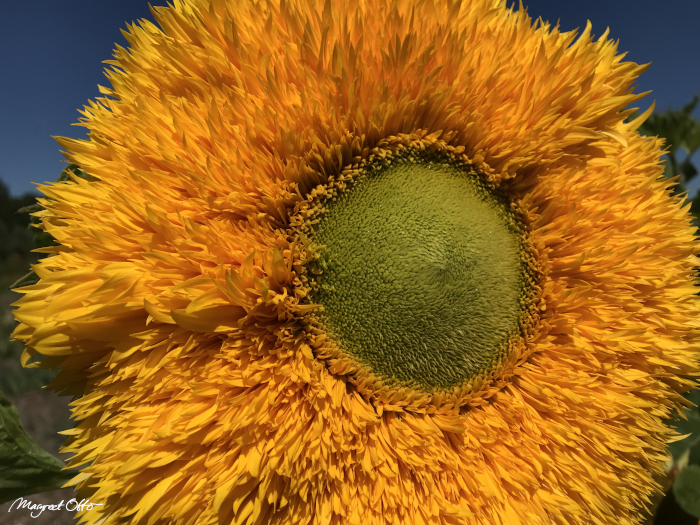 Start from the Heart

Interestingly, if one choses the hexagonal shape for their parcel of land, it is drawn in a simular manner as how one would start the heart center of a village. This is why the previous chapter and this one have some overlap. And again it should be stated that it is also possible to create a square hectare or a rectangle shape, or just a circle itself. We use a hexagonal shape here, but please be creative according what you and your fellow villagers desire for yourselves. 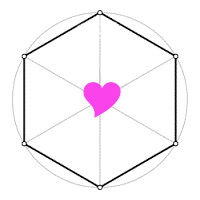 Start from the Heart
Now we could as well start with the design of a village first. Just for fun. And for this, we’ll have to create the center of the village first. After all, that’s where all projects begin, starting from the heart! Pondering on this, probably the entire construct of a hectare village can be done by laymen too, with careful planning and in co-creation with the required professionals. At least it’s fun to dream about it! Who knows, one day it might become a reality. 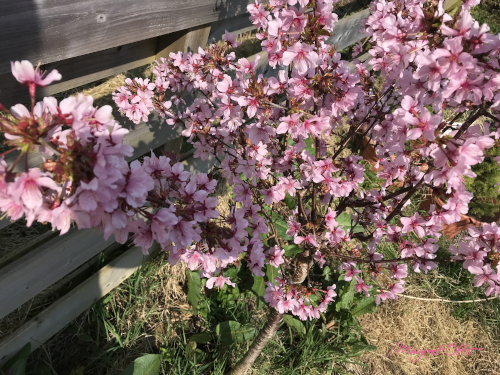 Measurements
A hectare has the surface size of 10.000 m2 in the metric system. But the size for a kindomain might vary slightly from a minimum of 1 hectare up to 1-1,3 th of a hectare. Initially I placed the calculations here for a hexagonal hectare. But since there may be variations in the actual size of the hectare itself, as well as the shape itself, I have decided to remove these.

Because if its either a hexagon, square, rectangle, circle or triangle, everybody should decide for theirselves. For any shape however, it is possible to define its middle point and create the shape or structure around it. 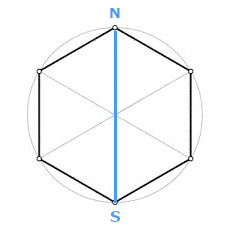 Using a Compass
As you see above, a ‘standing’ hexagon has one of its diagonal lines in a vertical position. It connects the outer Northern corner of the hexagon and its opposite corner South. As stated in the previous chapter, this ‘standing’ shape is what one hectare-field looks like in a flower of life village. Now how to find its Northern point? I suppose several methods can be used. One of them is using a compass.

Celestial oriëntation
Another way could be to use celestial oriëntation, such as determining a point at the horizon where the sun rises (in the east). Now this point varies throughout the different seasons. Probably it would be a good idea to use a specific day of the year for this, such as the summer solstice. To know the position and trajectory of the sun is also important for the design of the actual hectare itself. Nightowls however might have to look for the stars in the nightsky and watch for the North Star (Polaris). 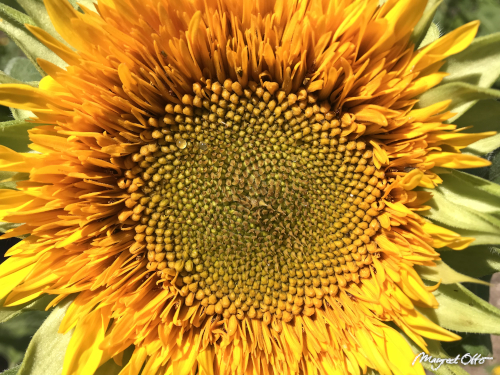 Coördinates
The coördinates of a hexagon are its center point and the 6 inner- and outer corners of respectively 60 and 120 degrees. All outer corners can be connected with a diagonal line to their opposit corners. There are three ‘corner-lines’ of those, which cross each other in the middle. This way they form a six pointed star and define the hexagon’s centerpoint. But how to construct this shape in the field? 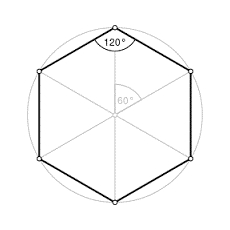 Three diagonal lines
In the shape of a hexagon, each of the three diagonal lines of a hectare has the length of 124 metres and 8 centimetres. This is 136.4 yards within the imperial standard system. With half the length of a diagonal line you can draw the surrounding perimeter of the hectare as a circle in the soil. This can be done with a simple cord and a tool such as a plank (instructions below).

Half of the length
Half of the length of each diagonal line in a hexagonal hectare is 62.40 metres or 68.2 yards. This is the length from the midpoint of the hectare to each of its 6 outer corners of 120 degrees. It is almost 4 cm taller (36 mm) than the sides of the hexagon (which are each 62.04 metres).

70 Yards or 64 Metres
Next, to simplify things, the length of half of the diagonal is rounded to 70 Yards or 64 Metres. But, as stated before, one can use any desired length for this half diameter, and of any shape basically, as long as it is of a total surface area of 1,3 hectare maximum. Thus for a square or circle, another length would be used. 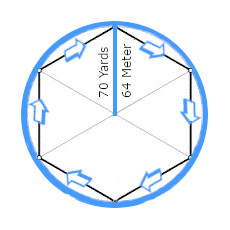 Drawing the Circle
By using half of the length of a diagonal, from the middle of the hectare to its outer corners, one can quickly asses most of the ground’s surface by pulling it around it’s centerpoint.

This way one can easily have an overview of the total reach of the hectare! And if one would want to alter the coverage of the terrain, you have to simply replace the midpoint to another location and start drawing the circle from there. 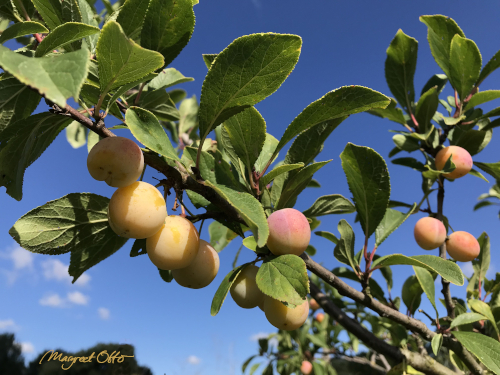 Use simple attributes
One can use simple attributes for the actual drawing of the circle and diagonal lines in the soil. First you need a cord with the total length of 64 metres, or 70 yards. Second, a simple tent peg to plug in de center of the hectare, or something else to connect the beginning of the cord with, such as a wooden post or a chair.

Third, a small plank or a small branch of a tree. This is your drawing device to connect to the outer end of the cord. Then one can actually draw the circle in the soil. Make sure the line is straight while doing so. 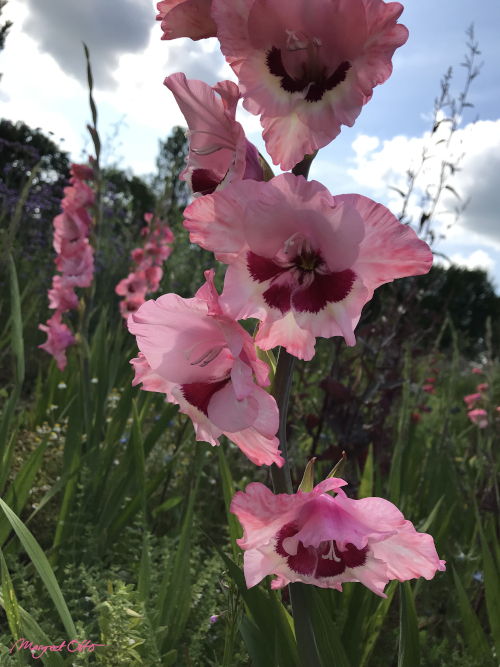 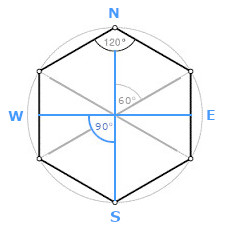 x and +
The hexagon has now 4 lines forming two pairs. One is an x shape (depicted in grey above) and the other a + shape (in blue). From these all other coördinates can be drawn. This is of value for both the horizontally positioned hectare village at large, and for the smaller hectare units. One can use the coördinates to line up parallel roads and structures, or for creative designs applied to the landscaping interior of the hectare field itself. 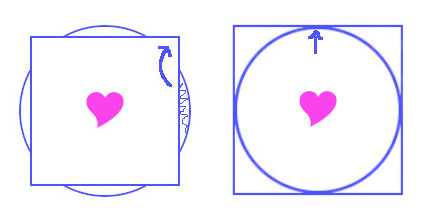 A square, rectangular or round hectare
In a similar manner, a square, a rectangle, or round hectare can be designed. These are shapes that would fit well in a motley patchwork pattern, as was mostly seen from a plane in the 20th century up to nowadays.

But I suppose it all depends how you go about it. These are obviously the most simple shapes to create on an actual hectare of land. The pattern the hectare is going to fit in (if any pattern at all) and its size, determines the length of the half diagonal. Again one stretches a simple rope from the center to the most northerly point and draw a circle and square from there. 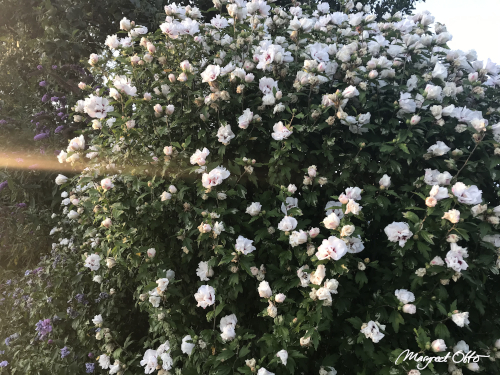 Part 5 of this series is about catching the light. Just as this flowering bush!