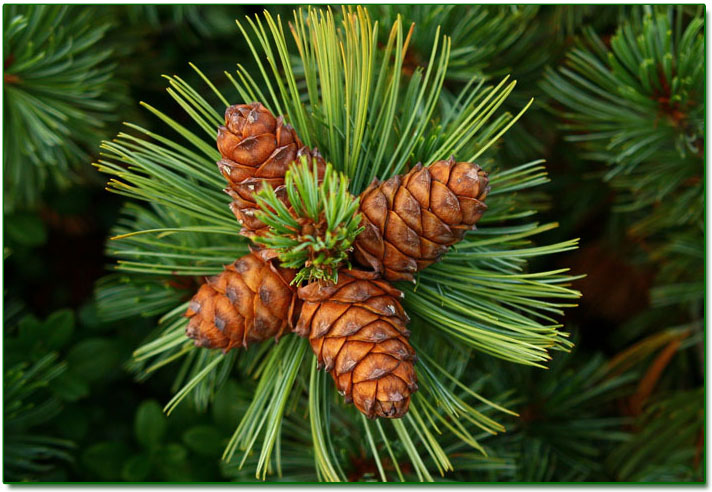 Part 4. The word Conifer comes from the Latin word ‘Coniferae’ which means ‘Cone-bearers’. This is derived from ‘Conus’ and from ‘Ferre’ or ‘Bher’ which means ‘Carrying’. More specified: ‘Bher’ includes the meaning of fruit- or children ‘bearing’ as with a pregnancy. (Picture – Ringing Cedars Russia).

In Mathematics a ‘Conus’ is described as:

‘A geometrically elongated shape with a circle as the ground surface, ending in a point. Between the two ends of the cone is the curved mantle on the outside, and inside the central vertical axis.’

The growth, size and position of the cones differs per Conifer species. The cones are on the branches with the end pointing upwards or sideways, or hanging on them. Conifer therefore belongs in the taxonomic classification to the Order of ‘Coniferales’, being the ‘conic-bearers’.

The eight important taxonomic grades are:

As a descriptive plant name (which also applies to trees), the Latin designation is included as a taxonomic standard as ‘Coniferae’. Conifers are wind bloomers. They belong to the ‘Seed Plants’ class (Spermaphyta), in the ‘Naked Seed’ category (Clade ‘Gymnospermae’).

The Cones
Conifers can be monoecious or dioecious. This relates to the propagation mechanism of the trees, which is represented in the cones. The cones accommodate the reproductive organs in two mutually different cones, the ‘male’ cone also called ‘pollen cone’, and the ‘female’ cone which is also described as ‘ovulation cone’ in the initial stages of cone formation at the tree.

The seed principles are predominantly present in the female cones, in which, after pollination by the wind through the pollen, which originate from the male cone, they further develop into germinating seeds. It usually takes one to two decades after planting a young tree before the cones begin to form.

TWO CATEGORIES OF CONES
There are two different categories of cones that vary in size. The first category is the Conifers cones with an average length of around 4 inches. These have a woody structure. The second category of cones has the shape and size of a berry, which also on this much smaller scale, contains a kind of cone structure, the envelope which consists of the berryflesh, with one opening at the bottom.

We refer to this type of cone as ‘Strobili’, in the singular ‘Strobulus’, although this term does not only apply to the cone-shaped berries of certain Conifer species, but to a wide variety of plant groups. In the following, the two cone types with regard to Conifers are described as: ‘Conifers Cones’ and ‘Conifers Strobili’.

CONIFERS CONES
The cones of Conifers such as the Pine, Cedar and Cypress are on average 4 inches (10 cm) long. The cones look different for each tree type, although the function is the same. On top of that, one tree can grow two differently looking cones. While other Conifers only grow one type cone. This has to do with their different reproductive systems. For instance, both sexes grow on the pine tree, namely the dark brown colored female cone and the light brown to yellow colored male cone.

Monoecious
The Pine is therefore ‘monoecious’, meaning that husband and wife live in the same house, so they live together. In this case in one tree. Hence a monoecious tree has both male and female cones. However, the wind ensures that the pollen produced by one tree can even be spread hundreds of miles through the air, through cross-pollination, and can land in the female cones of the same Conifer species much further away. So it can be!

Dioecious
There are also Conifers that are ‘dioecious’, in which case husband and wife each live in their own house, or in their own tree. In such a case, there is a ‘male tree’ and a ‘female tree’, and there are therefore two houses. Husband and wife then probably have a living apart together relationship. Dioecious Conifers therefore contain either only the male cones or only the female cones. Some shrub-like Conifers belong to this category.

These dark brown female cones really have the shape of the specific geometric cone. It consists of woody scales that partially overlap each other spirally. Underneath each scale is an ‘ovulation’ sperm principle, being the unfertilized egg, the ‘Endosperm mother cell’. This seed principle in the female cone, which is also called ‘seed bud’ (because it looks like a flower bud in a certain sense), has yet to emerge, and is uncovered. That is why Conifers in taxonomy are among the ‘nudes’ (Clade ‘Gymnospermae’).

The ovulation cones
In the early stages of the growth of these female cones, the cones are still small and soft, while already showing the geometric structure. They look like small egg shapes that grow on the branches, with a direction of growth proportional to the branch. In this early form, the cone is called an ‘ovulation cone’.

After reaching this stage, it will grow into an adult cone in two years. When the cone and internal ovule principles are fully grown, the cone focuses more away from the branch with the point facing outwards, and over time the cone opens its brown scales. The seed buds under the scales are now ready to be fertilized.

For example, the male cones have the farthest range in the open air to be scooped by the wind, so that the pollen formed in the spring can optimally be disposed of. These are then blown into the air by gusts of wind, and due to an aerodynamic design build on the pollen, they can float tens to hundreds of miles through the air before they land in the open scales of the female cones, of trees nearby or much further away.

Development
When a female cone, being the ovulation cone, collects the pollen, the egg present in the ovule principle is fertilized. After fertilization it grows into germinable pine seed under the scales of the female cones. This seed develops slowly in a few years, and forms a dark brown skin which later hardens into a skin around the seed. Over time, the fertilized cone releases from the branch and falls to the ground to germinate.

Spread
For example, squirrels and certain birds also distribute the cones and thus the seeds. The squirrels by storing them underground as winter supplies, which are sometimes not used and then germinate into a tree plant. In addition, there are also clever people who harvest the seeds for consumption or to grow into saplings. In this way, the cross-pollination and reproduction take place at Conifers. Conifers are therefore wind bloomers, and do not need bees or other insects for fertilization.

Consumption
The mature seeds, when they are suitable for human consumption, must first be removed from the cones or shaken, to subsequently peel each unique seed. These pale yellow colored pine seeds or pine nuts are extremely nutritious and do well as an addition to culinary dishes. An edible oil can also be pressed out that is extremely nutritious.

CONIFERS STROBILI
In some shrub-like Conifers, the cones have the shape and size of a berry, and the shell consists of flesh around a seed bud (the egg) that is also uncovered in this type of Conifers, because the end of the berry has an opening. In that case it is no longer called ‘Cone’, but ‘Strobilus’.

The word ‘Strobilus’ is a descriptive term for the various manifestations of ‘cones’ or ‘cone-like structures’. Moreover, the Strobilus does not only occur in certain Conifer species, but in a wide variety of other plant groups. The word comes from the ancient Greek ‘Strobilos’ which means ‘Whirlwind’. It refers to the rotating shape of the plant part that houses the reproductive organs.

Formation
Just like all types of cones, the strobilus has a nice geometric structure that is formed around a central, vertical axis. This axis originated from the stem, and is provided with spiral or cross-implanted structures. These carry the spore boxes (sporangia) that carry seed buds or (partial) fruits. The spores are formed in the spore boxes. Leaves that carry spore boxes are called ‘Sporophylls’, with stems one speaks of ‘Sporangiophores’.

Exotic
There are also the Podocarpaceae, an exotic Conifer family from the southern hemisphere. In the northern hemisphere, however, the mutual species differ considerably in appearance and size. There is no clarity about the taxonomic classification, and it has been subject to change over the decades. That is why we will not go into it further here. Also for this type of Conifers, the pollination for the formation of germinable seed always takes place via the wind.