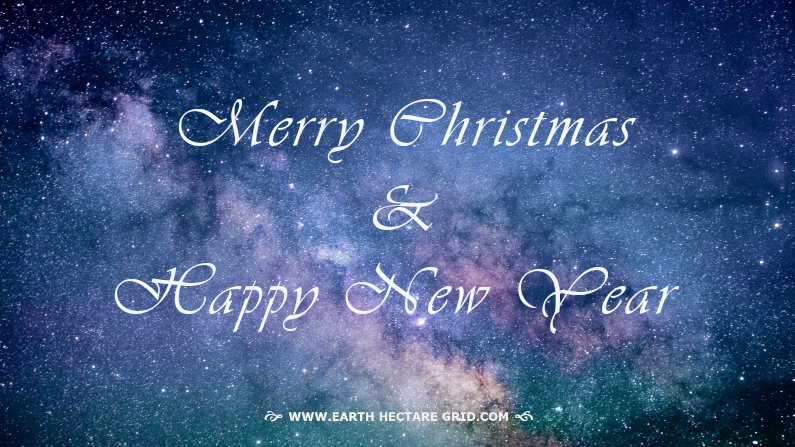 From The Earth Hectare Grid to the world, a Merry Christmas to you all. It is from deep within my heart, that I feel an urge to write this. Over the last year, and increasingly last months, we’ve seen a lot of trials and tribulations going on, world wide. As more people are completely fed up with all the chaos going on around us, such as the dismantling of our economic structures, the devasting loss of nature and the animal kingdom, the political disconnect from our leaders with the peoples, the emotional despair of the millions that are now losing their livelihoods, or fear they are going to, there’s just too much negativity going on.

And while many try with all their might and power to turn the tables, and while doing so coincidentally discover their treasure of hidden powers, such as love, connection, courage, inspiration and many, many, many insights, the question arises, whether it is enough?

Nothing seems to be changing for good. It is as if we are powerless to create this heart fullfilling everlasting change. Which brings me to Christmas, because this is the week where it is going to be celebrated world wide by the millions.

The time of the year when we’re more contemplative, especially in the Northern Hemisphere where the days have shortened and are literally called ’the dark days before Christmas’. Now, I’ve heard some Christians online stating that those who won’t stop doing their evil deeds, will burn in hell forever. This got me pondering, because although I might understand where they are coming from, or not, it is quite a bold statement, isn’t it?

I’ve never believed this, and although I consider myself a Christian, I’m not buying that. What God would want any of His children burn in hell forever? Come on! Forever is a long time, a very long time. We can’t comprehend eternity, or can we? Shakespeare already summed it up with his question ‘To Be, or Not to Be’. Thus it is just the logic, and I have been wondering, that although the Bible is a holy book, some translation issues might have come into play. For example, in Dutch language, an ‘eeuw’ is a century, which is 100 years. And then we have the word, ‘eeuwen’, which means many ages. And then we have the word ‘eeuwig’ which means forever. Go figure.

Another question is, was Christ born in December? Some think he was born somewhere late summer, and probably while the North Star, appointed as the star of Bethlehem, only touched the horizon in the Southern Hemisphere for a brief moment. This could be an indication of a celestial clockwork, but I do not know the answer to that as I’m not an astronomer. But He Was Born. Hallelujah!

Then we have other Christmas elements, such as Santa Claus (which might have been the Dutch Sinterklaas (who wears a cross on his miter), also stemming from a Christian background as these were appointed as saints (who originate from Turkey & Spain). To top it off, all the Christmas sentiments in the Northern Hemisphere are promoted with merchandise of snowy sceneries and Christmas decorations and lights and trees, but the winters have come warmer, there’s sometimes no snow where it used to be (except for mountain areas). And also, this merchandise leaves out the Southern Hemisphere a bit. Christmas in the tropics is therefore a different feeling.

And then, of course, according to all the advertisements and television programming, we have to be happily together with family and friends. And those who follow the biblical version of events, also go to midnight mass. Which is all good.

Returning of The Light

Others have stated however, that the Christmas celebration with the trees and all the ornaments, origins from primal peoples celebrating the returning of the light after winter solstice, which is today!
Thus Happy Solstice!!! Today is the start of winter here, and in the Southern Hemisphere, the summer.
And this year it is a bit of a magical date, isn’t it? 21-12-2021.

The winter solstice was already celebrated in the Northern Hemisphere by the pagans and probably other cultures and creeds too. There are also storylines that Roman and German Emperors decided a few centuries back that it would be a good idea to connect the biblical story to this solstice event, so there was a special day every year that people could remember Him, and get all the noses pointing in the same direction, because so many crusades and political unrest were going on. Probably the leaders of these societies were looking for order, regularity and justice? Could be true.

The point? Well, if we’re talking about, eternity, forever, we might want to look to the stars for just a little bit. It is because He said: “Let him who is without sin, cast the first stone.” Those stars are the representatives of eternal life, love and light. This is for all human beings. Not one soul excluded. No matter what color, race, religion, faith, gender, as we collectively evolve in our grandness of being, ploughing ourselves through depression, despair, illness, fear, horror, shame, alternated by glimpses of insight, feelings of wealth, health and abundance, joy, laughter, happiness, and every human emotion and experience in between these extremes, we’re finding ourselves in the rollercoaster called Life.

Therefore my festive greetings, for whatever you’re celebrating, or even if it is a mixture of it all, wishing you a Merry Christmas and a Happy New Year!

LOOK AT THE STARS!!!

Margreet of the families Otto and Wilschut.

That Love and Light will prevail. May Peace be With Us.

Oh and if you’ve read this far, a few pages have migrated from the Dutch website on hectares-villages to this website, and have been translated in English page by page. Because this is all done by labor of Love, and was quite a lot of work, it was messy a bit for it couldn’t be done all at once. Just the animals page alone, turned out to get five subpages. Thus my apologies if it has caused any incovenience. There are still a few pages to be translated so please bear with me!